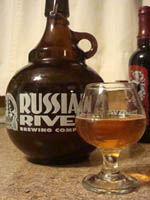 What Makes a Beer World Class?

Let me 'splain: I started playing with numbers to see how "top beers" varied across the different rating sites. I also wanted to see if there were any trends to what people consider "top beers." At first, I did this for fun because I love crunching numbers and comparing things. This exposed a trend in the beer ratings. What I found was that to be a highly rated beer, the beer must be very high in alcohol or be very rare. This begs the question: Does hype and rarity make a beer taste better? Does having a higher alcohol than the other brewer make a beer better?

But, what about the incredibly well-crafted lower alcohol beers? 35/39 of these are over 7%, but most are between 10% -29%. It seems that the bigger/bolder flavors and higher alcohols are preferred over the more delicate and difficult to brew. You can hide a lot of unfavorables in a 12% Imperial Stout, but you can't hide anything in a 5% Pilsner or Altbier. As a long time homebrewer, I can make a fantastic Imperial Stout without even thinking about it, but I couldn't make a Pilsner or Marzen without getting it wrong two or three times first. Those lighter, smaller beers require you to get everything exactly right - and those who make them well are masters at it. I think the little light colored beers need a little more credit. Ever had a fresh Reissdorf Kolsch? The best. Weinenstephaner Hefe? Fantastic. The smaller beers won't blow your taste buds out your butt, but the craftsmanship it takes to get it right should garner some respect.

I'm not really ranting or devising any universal answers, but I was interested in the trend that I discovered. I love the big beers and I chase the rare ones just like everybody else. And I have had many of the beers on this list (24/39) and most were fantastic, so I'm about as guilty as anybody about rating them highly. It's an interesting trend. How does one bring light to the perfectly crafted small beers when the bigger bolder beers will always 'wow' us more? What are your thoughts?

(Explanation of how I made the chart below)