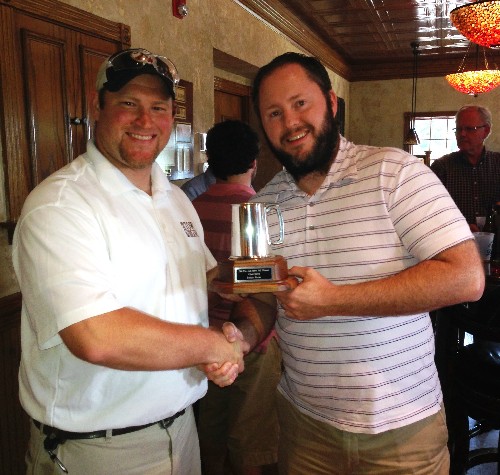 [LEXINGTON, Ky.] - Diehard craft brew fans appreciate the perfect balance of art and science that ferments in the keg of a homebrewer; and oftentimes it takes casks of attempts to get that balance just right. Yet, two local brewers have their formula all figured out. On July 2, mugs were raised in a toast to husband and wife duo, Chad and Mary Shive of Lexington, who took home the first place prize in the 8th Annual Kentucky Ale® Pro-Am Brew-Off, hosted by Alltech Lexington Brewing and Distilling Company, for their palate-pleasing Robust Porter. The winning brew is described as a dark, light-bodied, chocolaty ale with a dry finish.

Brewing beer  together "just for fun" in their garage since 2008, this is the first time one of the Shives' concoctions has taken home a first place cup, though others have won in their respective categories at various homebrew competitions across the Bluegrass.

"One of the great things about the Alltech Brew-Off is it allows regional brewers the chance to come into a professional environment and showcase their abilities and technical styles. I'm very excited that the people of Lexington and surrounding communities will have the chance to taste something that my wife and I crafted. It's a great honor to have our beer brewed at a commercial scale," said Chad.

A panel of Alltech brewing experts and master distillers served as judges in the competition and assigned each beer entry a scaled rating for flavor, aroma, appearance, color, mouthfeel and overall likeability. The Robust Porter garnered the overall highest score among 20 competitive entries from Kentucky and Ohio. The beers were brewed at Alltech Lexington Brewing and Distilling Co. on May 10 as part of Lexington Craft Beer Week, and were judged two weeks ago.

"The regional homebrewers made it tough again this year to select a winner, and it seems to prove more difficult each year as entrants become more sophisticated in their skill. But Chad and Mary have been participating for at least five years and their improved skills are apparent. The dark-colored slightly smoky, slightly chocolaty ale with a pleasant mild, roasty dryness on the finish won the judges over. It was great to see them rewarded for their continued efforts and participation," said Ken Lee, master brewer and brewery manager of Alltech Lexington Brewing and Distilling Co.

Along with the crowning title and shiny, silver cup, the Shives are also awarded recognition on a wider scale, as Alltech Lexington Brewing and Distilling Co. will make the limited-edition Robust Porter available on draft across the region in late summer while it lasts. An official name and logo for the beer will be chosen for the beer before it is released.

The Shives will also receive a trip to Denver, Colorado and a submission to compete in the Great American Beer Festival, Oct. 2 to 4, 2014. The nationwide festival draws visitors from all over the world with the opportunity to sample 2,800 different American beers from 600 breweries.

The Kentucky Ale® Pro-Am Brew-Off competition is held each summer at Alltech Lexington Brewing and Distilling Co. to kick off American Craft Beer Week and is open to brewers across the region. Homebrewers provide all equipment and materials, except water and yeast, which are provided by Alltech.

According to Chad, a wealth of thought went into complementary ingredients in the winning brew. "The Alltech Brew-Off requires brewers to use either the Kentucky Ale® or Kentucky Kölsch™ yeast, so instead of trying to force an off-style beer on to that yeast, we tried to pick a style that would be accentuated by its characteristics. We placed a prominence on dark malts, both chocolate and black malt, to give our beer the classic porter character with a sprinkling of crystal malts to maintain body and balance," he said.