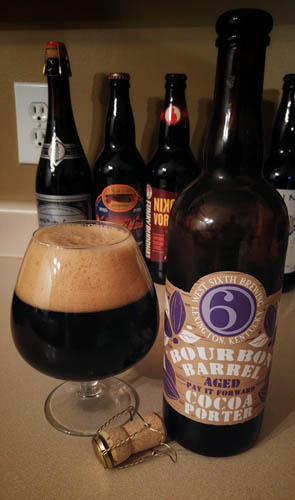 So this beer has been the hot topic among local beer nerds the last few days. Polarizing would be a good descriptor. Over-carbonated...drain pour...tastes like cheap whiskey...adored it...gets the job done...the opinions run the gamut. I fall somewhere in the middle. The nose is predominantly bourbon, with lesser notes of cocoa powder and dark fruits. With warmth comes a hint of musty oak. The flavors are where things get a bit dicey. Once again, bourbon is the attention-getter, sweet and slightly spicy in its presentation. I personally like a "hot" bourbon barrel beer. Maybe that's due to my lack of a discerning palate when it comes to bourbon. About halfway through this, I decided to compare it to the regular Pay It Forward Cocoa Porter. As luck would have it, all I had hiding in the back of my fridge was one that was canned 18 months ago. (For the record, it has held up remarkably well) At any rate, what seems to get lost in the barreled version of this beer is the richness of the cocoa as the bourbon sweetness becomes almost cola-like and pushes the powdery bitterness aside. Over-carbed? Probably a little. Drain pour? Not to me. Could it be better? Probably. Seems a bit thin and lacking in complexity. But I'm not a brewer, so I have no clue how you improve it. I'll know it if I taste it, though. West 6th has been killing it in the Barrel Room as of late, so I won't let a bump in the road temper my enthusiasm. That's the beauty of craft beer...my right is someone else's wrong. And my OK is still someone else's wrong. Cheers!