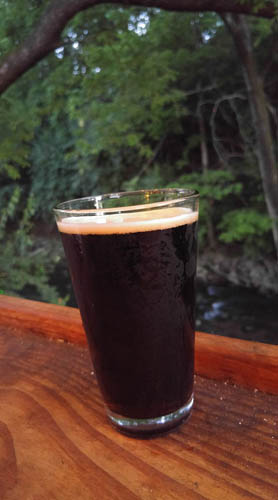 Playing (using that term loosely) in the Country Boy Half Pint Golf Scramble prevented me from getting to Blue Stallion for the Test Batch Tuesday event, so I did the next best thing...gathered with some of the other golfers and enjoyed a BS beer at The Break Room. Even though this one has been around for a while, I've never tried it, mostly because I'm not a huge fan of peanut butter beers. This one, however, is stellar. Tons of chocolate and peanut shell on the nose, with faint coffee in the background. On the tongue, this is all about rich, roasted peanuts. What sets this apart from the ones I've disliked is that the peanut butter doesn't taste artificial. It's almost creamy with nice bittersweet chocolate and a touch of toasted brown bread. Really a nice beer.