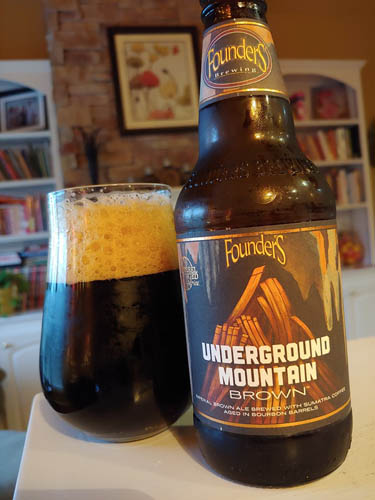 Outside of Más Agave, which was polarizing (but I loved), the Barrel Aged series from Founders has pretty much misfired for the last couple of years. This puts an end to the slide. Huge notes of bourbon strike the nose initially, threatening to overpower. Aeration brings a rich, nutty coffee in for balance, along with a wave of deep chocolate. Flavors follow a similar path...bourbon hits hot, with caramel and oak undertones. The mid-palate is filled with an espresso roast and charred bread crust, wrapping up with a baker's chocolate and earthy hop bitterness. This isn't going to wow everyone, but it does me. It's a brown ale base, so the big, thick mouthfeel associated with so many bourbon barrel aged beers won't be found. But I think what is here stands up well to the barrel influence. Outstanding.