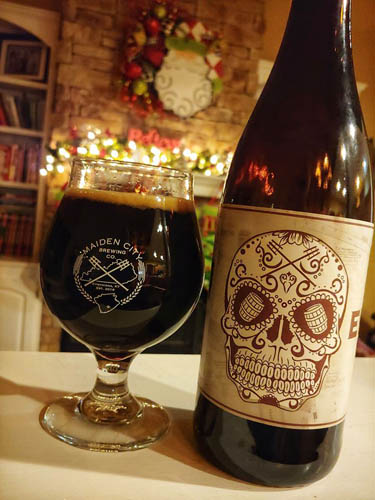 For their 3rd Anniversary Party, Maiden City has dropped this hazelnut coffee delight into some Wilderness Trail barrels, resulting in a gift you'll want to pick up for yourself ahead of the big guy's arrival next week. Coffee dominates the nose in the early going, robust with a nice char, opening up to some dark fruits. Hazelnut really starts to shine as the glass warms, joined by the caramel and oak notes of the bourbon barrel. Whereas many barrel aged beers can get too thick and sweet, this one maintains a medium body that really lets the various aspects of the flavor profile have their turn in the spotlight. Once again, the coffee leads the way, slightly charred with a nice kick of chocolate that lends a subtle sweetness. Hazelnut is nicely balanced against mildly earthy hops, and although the bourbon is obviously there, it never overpowers, instead lending traces of caramel, vanilla, brown sugar, and even a suggestion of coconut. Seems to get more complex as the temp comes up. Last year's was good, but this is even better. Excellent beer!