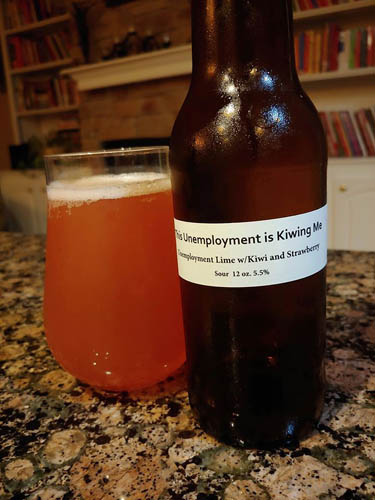 Year of New Beer (Round 2): This Unemployment is Kiwing Me, Ethereal Brewing Co (Lexington)

The Unemployment Lime sour has lent itself well to a series of variants, and this is another winner. Lime rules the aroma, with the strawberry not coming on until fairly late in the pour. Slaps you in the face with a giant punch of sour lime, and then doubles down with tart strawberry and kiwi. Even though they aren't there, this one offers up suggestions of berries as well. I think the strawberry comes off a little less prominent I, this one, but it's still so good. This base beer and all of its variants have been nothing short of spectacular. I appreciate the opportunity to try it, and a big shout out to the awesome beer friend who shared it with me (I'll let him/her remain nameless).