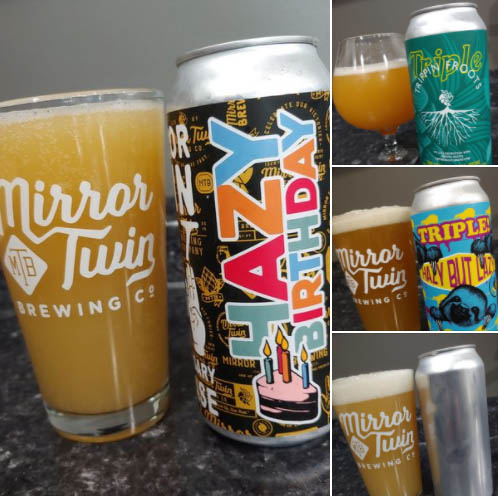 That awesome sour isn't the only new can available at MT tomorrow...Hazy Birthday may be the best NEIPA they've done to date. Tropical, citrusy, soft...it just checks all the boxes. Triple Trippin Froots gets an ABV boost but still drinks like a beachy brunch cocktail. Lime, pineapple, and tangerine all pop against the herbal hop background, nearly "spritzy" in nature. Hazy But Lazy, the O.G. haze, gets the Triple treatment as well. Bigger, maltier, and overall a touch sweeter than it's smaller siblings, but no less delicious. And lastly, the unlabeled can, I Wanna Talk to Sampson, the key lime pie New England IPA. This time, it's built with Hazy Birthday as the base. Plenty of lime and whipped cream on the nose, with the pie elements finding equal footing against a modest bitterness on the tongue. These are all impressive in their own way. Looking forward to picking up more, as well as five(!) Barrel Aged Chernobly variants in bottles. Just a huge weekend for Mirror Twin Brewing Co. Congratulations guys!