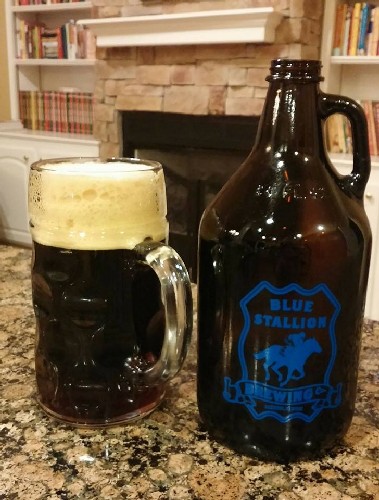 The Big Jug calls for the Big Mug, right? Set to be released to the public in two weeks (Jan 17th, my beerthday!), I'm honored to get a sneak peek of this brew. I have to laugh when I hear people say, "Too many breweries opening up in Lexington, they're going to over-saturate the market." Asheville, NC is one of the best beer cities in the U.S. Population? Approaching 90,000. They have a dozen or so breweries in about a 5 square mile block of downtown. Population of Lexington? Around 300,000. Breweries? Five. Six if you count the currently expanding Chase Taproom. So, according to my remedial math skills...we're way behind. The cool thing about the Lexington scene is that everyone seems to be doing their own thing. And that's good. I have to admit, when I heard (prior to their opening) that Blue Stallion was going to focus on German style beers, I thought failure was imminent. I could not have been more wrong. Where I often crave palate stripping IPAs and hefty bourbon barrel stouts, another 299,999 people may be looking for a more delicately crafted beverage. Tonight, I've found it. Boasting a nose that leads with the crust of brown bread, this beer is a sneaky beast. With warmth, the classic doppelbock features present, as raisins and brown sugar build on a base of nuts and cured tobacco. The alcohol is well-hidden, making this one dangerously drinkable. Caramel malt and a faint dose of earthy hops pose a nice foil to the sweeter apple skins on the finish. Blue Stallion, I was pleasantly surprised by your Bourbon Barrel Maibock in the spring, and tonight I have thoroughly enjoyed your Doppelbock. As my palate evolves, I look forward to you providing the classic styles to which I am just now returning. Well done!