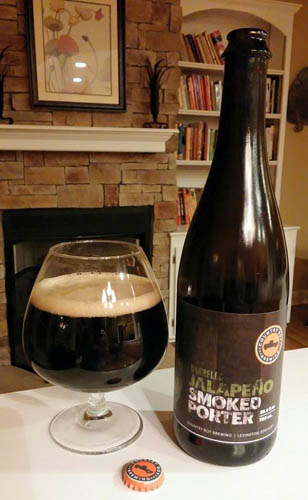 When Evan Coppage and the guys made the first batch of JSP, some discussions were had as to whether or not the beer would ever be brewed again. In short, the prep of the jalapeños was quite simply a pain in the ass. Not to mention a pain in some other places if you forgot to wash your hands BEFORE going to the bathroom (according to Mr. Coppage). But, alas, a favorite had been born, quickly establishing an almost cult-like following. Given the Boy's propensity for barrel aging, you knew this was coming. A small amount of JSP was aged in Sazerac barrels a couple of years ago, and I missed it. I haven't received confirmation on the barrels used in this incarnation, but I'm not picky...it's really good. The aroma is not all that dissimilar from the original JSP--very mild chocolate and coffee bean with the pepper skin present in the background, tempered by a mild, oaked bourbon. On the tongue is where the real difference arrives. Whereas the original has a tendency to get a little too hot at times, this one seems to get softened and reined in by the sweet bourbon influence. A nice, earthy hop bitterness hits mid-palate, followed by the Jalapeño heat. Smoked oak and lighter hints of caramel and even vanilla provide a fantastic underpinning for this big brew. I would love to pair this with some slow smoked ribs. If you would like a bottle to do the same, head on over to the taproom on Chair Avenue this Saturday, when the Boys bring the heat at noon.