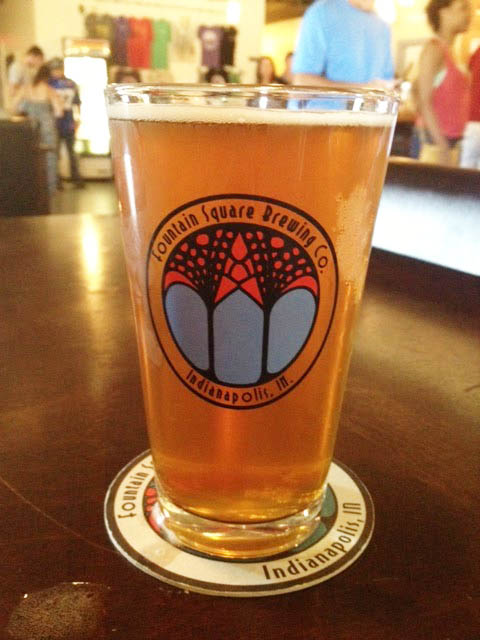 I stole my first pint glass on October 22nd

The location: Chatham Tap on Mass Ave in Indianapolis.

The Beer: Hop For Teacher by Fountain Square Brewing Co

Allow me to set the scene...

It was my first birthday in seven years as a single female girl. No boyfriend, no responsibilities. So naturally, I planned to spend the night with a male companion who was a little more than slightly older than me...who I had a major old-guy crush on...? This guy was a TA for one of the classes I was taking at the time and I totally wanted to date him, despite the majorly inappropriate age difference (Long story...which requires days, months, years of explanation the likes of which we do NOT have time for...) Ahh, I digress...

SO, I decide that of all things I want to spend my birthday with HIM. I have recently discovered that I have a taste for beer. Not just any beer. GOOD beer. CRAFT beer. The kinds of beers you search for and travel long distance for and plan weirdly specific day-trips for. That kind of beer. It's October, so naturally we start the night with some pumpkin beers at Rock Bottom Brewery in downtown Indy. We make our way to Mass Ave and stumble into Chatham Tap. It's crowded, as usual, and we just happen to steal a table for two in the back. What would we like to drink, the waiter inquires...and we happen to notice a small advertisement for a new brewery in town: Fountain Square...and they have a beer named "Hop For Teacher," the irony of which is not lost on me as I am currently carrying on a secret one-sided "crush love-affair" with a middle-aged out of bounds TA. Anyways...out comes this beer, in this glass that I MUST have. I want this glass. Was it the ironic name of the beer? Was it the intricate tree design? Was it the pop of robins egg blue and orange? OR was it the suggestion from my partner in crime as he stated innocently enough "Cool glass." Whatever the motivation was, that glass was surely coming home with me.

Now, I have been served millions of drinks in millions of bars and restaurants, in a variety of different glasses and have never given one thought about taking my glassware home with me, until my 26th ask my friend. Lucky for him, I'm a chick who likes her accessories and I'm known to carry very large purses. This night was no exception. As I recall I was carrying "the fall bag," an oversized, hobo-style, green paten leather Coach bag (love of my life...). This bag was practically begging me to put that glass in it. It was too easy. And it was. The crowded atmosphere and our almost invisible table for two in a hidden corner in the back added to the simplicity. My friend made a move to the bathroom and I casually slipped the glass into my purse. We exited out the back. And the rest, well the rest is history...

I'd had my first taste of pint glass kleptomania...and I wanted more. My eyes had been opened to the exciting world that is craft beer paraphernalia, and I had to have it ALL. And I've done pretty well for myself over the past two and half years. So I'm sure you're asking yourself "where is she going with this, what kind of literary journey is she taking me on!" And I'm glad you've asked. My hope is to guide you through all of my quirky pint glass-stealing adventures, as well as discuss different breweries and the beers I've been lucky enough to taste along the way. Like Fountain Square Brewing Company...When I stole this glass, they weren't even a fully functional brewery yet. They were set to open in January 2012, and had released a few of their beers to different bars around Indy. We were lucky enough to come across it on Mass Ave. Hop For Teacher is American Pale Ale (ABV: 5.4%). At the time, I hadn't really developed a taste for hoppy bears just yet. My appreciation for craft beers was in its infancy. I think the beer was decent, but that night I was mostly fixated on its serving vessel. BUT, Fountain Square Brewing Co has an AWESOME tasting room and lots of delicious beers to sample and, of course, great merchandise. I highly recommend it to anyone who is visiting Indy.

Perhaps the best part of this story is that I didn't even steal the glass for myself. I stole it for the guy I was with. I purchased my own glass in January 2012 when I visited the brewery for the first time and sampled all of their beers. But, every time I see that glass I'm reminded of that night and of my first steal...and of making out on a random street corner in downtown Indy(I wish...), but again I digress... And that, ladies and gentlemen, is the point (no, not the making out..): Every glass has a story. A memory associated with it. A feeling, a friend, a great beer, etc. I have a cabinet (or 2, or 3) full of these memories and stories and I've decided I want to share them with others.

SO this, my friends, is the beginning of The Pint Glass Pages. I hope you stick around

For more info on Fountain Square Brewing Co visit their website at http://www.fountainsquarebrewery.com

For more info on Chatham Tap visit their website at http://www.chathamtap.com