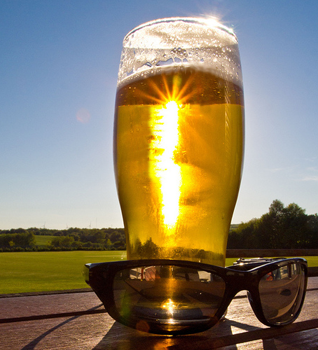 Beer Trends for the Summer of 2013

This weekend's forecast: highs in the mid '80's, mostly sunny, and a 100% chance of beer! With all of those outdoor activities to draw you into the sun, how do you go about picking the perfect sudsy treat in tandem? Fortunately, there's a whole cast of craft brewers who have got it all figured out- they have beers designed specifically for these occasions.

Their "summer seasonal" varieties capture the taste of summer with bright and zesty fruit flavor, crisp citrusy bitterness and a light refreshing body. To the avid beer enthusiast these seasonal brews are no surprise, but there are a few trends that are quite unique to this years' beer scene that need further exploration. So whether you've got your fishing pole, suntan oil, pool towel, sun glasses or simply a bar stool- you're going to have a cooler of beer by your side. Let's figure out what goes in it!

Hop-forward ales such as IPA are well documented to pick up in popularity as the mercury rises, however at the typical ranges of 6.5%-7.5% in alcohol, those long sunny days can turn to a blur in a hurry. Several brewers have filled the need for hop flavor in lighter alcohol ranges to keep your motor running well into the night. These beers capture all the citrusy goodness of American IPA with fresh-picked citrus fruits- oranges and grapefruit are most noteworthy. But the ales also pick up the herbal and sometimes grassy, piney resinous at middle palate and the teeth churning pithy bitterness to finish. All this is achieved with alcohol ranges that rarely topple 5.0% and share a lighter body that may seem lager-like in their drinkability.

If these evoke mouthwatering stimuli, then you'll want to seek out "All Day IPA" by Founders Brewing Company; "Session IPA" by Schlafly Brewing Company (available in cans); and Brooklyn Brewery's "Scorcher #366" that explores a hop variety that's so fresh that it doesn't yet have a name and is only available on tap at your favorite craft beer bar. And even though it's not exactly a summer seasonal, if you catch Three Floyd Brewing Company's "Zombie Dust" then just do yourself a favor.

The second phenomena that's worth discussing is that a single seasonal offering might just not be enough. So many of today's brewers are putting multiple summer beers on the market, even if sacrificing one of their mainstays in their standard portfolio.

For instance, Founders has released the "All Day IPA" and the tantalizing "Rubeaus" with reckless amounts of raspberry additions. Not to be outdone, Cleveland's Great Lakes Brewing Company promotes both their summer Imperial IPA- "Lake Erie Monster" and a thirst quencher in "The Wright Pils"- a German-style lager that beats the pants off of your dad's lawnmower beers. Schlafly's "Session IPA" is kept company on the beer shelf with their "Export (X) IPA"- an English-style IPA that pays homage to the original highly hopped ale. And Southern Tier ups the ante with "2X Steam", "Live", and "Creme Brulee"- that's right, let's make it three.

Some question whether seasonal ales are becoming so popular that there may not be any room left for year-round varieties. But if it means that we get such characterful beers that match the mood of season and ensures freshness and pairs with dishes of summer fare, then I'm sure that we all like where these trends are going. Cheers, now go and cool off with a cold one!