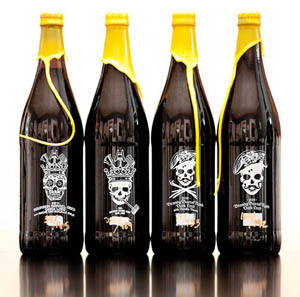 Screwed Up Beer Week (vol 1) - Getting Myself In Trouble

The "Getting Myself in Trouble" Edition, pt. 1 of many

So, e-e-e-verybody is a beer expert nowadays. From the gal who works at that place that carries nothing better than Blue Moon and Shock Top, to the guy who cherry-picks all the local hot spots for "white whales", to the newby who just learned to pronounce "hefeweizen" correctly last week- we're all craft beer experts; preaching the good beer gospel at every turn to anyone who will listen and completely against their will. We're all chasing the trucks; we're all aware of how to acquire a Westvleteren 12 in the black markets; we're ok with spending a whole $4 for a pint o' hops; we downloaded all the coolest "who's drinking what" apps; and we think we know (kinda, sorta, ...not really) what brettanomyces is. We all write the most whimsical reviews, host the most elaborate tastings and post in the most popular blogs. Yep- we're all experts here. ...or are we just a bunch of know-it-all's instead?

All right- that's just a glimpse in what I'm going to be doing for LexBeerScene for the upcoming weeks, or until I get myself kicked out of the LBS club. I'll post about the most controversial, contentious and lamented issues that arise in the whirlwind that is today's craft beer scene. And since everyone else who writes about beer want to play a more diplomatic and friendly game, this segment will give me a chance to take the gloves off, to exercise some sarcastic freedoms and to take some jabs at the pieces and parts of that scene that most folks are content to dance around. And, I'll be doing so from the perspective of a craft beertender.

Don't take it serious, its just a way for me to talk about what I see while shooting from the hip a little more than usual. But I'm just one man- do you have a topic that you want me to spout off about? Put it out there and I may just give you three cents worth. Also follow the conversation with me on Twitter: @BEERchitect #ScrewedUpBeerWeek to keep things rolling. So get the popcorn ready, pull up a seat and finally find what I really do think about the current climate of beer. Trust me, its a colorful (if not muddy) world out there. Stay tuned...

Oh, and by the way all you craft beer fans out there- wash your damn hands! I'm appalled at how little soap that I have to replenish in the restrooms each week. Of all the things we won't splurge on, soap is one of them!

Later this week, or next week, or whenever (depends on when my first of 365 hangovers this year will let me) I'll tell you what your New Year's resolution should have been. Cheers!