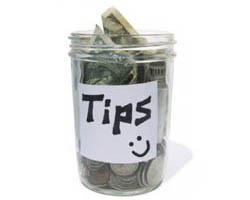 Screwed Up Beer Week (vol 5) - Time to Open Up the Purse Strings, You Tightwads!

Ok, a guy walks into a bar... actually, this applies to everyone. Ok, ok... Everyone walks into a bar. Everyone orders beers, everyone drinks beers, and almost everyone pays for beers (we know who you are!) But there's that line on the receipt that's below the "amount owed" and above the "signature" that's a source of anxiety for most. That's right- the one where you get to reward me with how well your experience went today. Most of you do your part to keep me content on the business side of the bar, however there's a few of you who don't believe in tipping at all... and the rest of this message is for you:

Let's say that you and your manifestos win over the beer drinking masses and our tipping culture at beer bars is turned in your favor; this is what its residual effects mean to you... It means that I no longer make enough money to pay my bills so I have to quit working at the bar. But wait! My employers aren't going to let that happen, so they are going to pay me a decent and competitive wage. That's good, right? I get to continue gracing you with my smiling face and you don't have to tip! Awesome, everyone wins!

That is except- how will my bosses going to get the extra moolah to keep me hanging around? They are going to start selling all those yummy, yummy beers for which you came in at a not-so-little more than you are paying currently. And think about this- if the standard tipping range is around a buck for a beer, then that up-charge on the price tag will be significantly more than a simple dollar. But I agree, overhead is a bitch!

And keep this in mind- since I am working for your monetary gratitude, I am going to work exceptionally hard to make sure that your experience and my service to you is top notch. However, if I start getting my wage independently of what you're tipping me, then I no longer have to give two shits about you and your "experience".

"I'll just go to that other bar," you say. But since your non-tipping strategy won, the next bar will be just like mine, and that next restaurant, and that other hotel...

So now you are getting lousy service everywhere, and you're paying a lot more for it to boot! So now that you're sold and you're going to run out and start throwing all your hard-earned Benjamins at every cashier that you stumble across... Well, not so fast- here's a few tips from my side of the counter:

So the industry standard is $1 per drink. That applies to a pint of beer, but what about half-pints? Sorry to tell you, that's still $1, and that's because it took the bartender the same effort and care to pour half as much as it does the full pint. But what about flights? That's a little different, I'm ok with a little less than the norm even though it's very fussy to get it together for you. Samples? That's still a favor that has been done for you so consider half of a dollar for all those smaller pours. (And a flight is not one pour, it's four, six and sometimes eight individual pours).

Are you a regular? Then you shouldn't feel obligated to tip exorbitantly more than average. I'd rather see an underwhelming tipper three or four days a week than to see a big tipper once a month. Trust me- you're doing your part to keep my lights on and doing so on a much more consistent basis. Don't feel compelled to go overboard. But if you're the fussy customer that I see once every month and are taking my efforts away from the next tipping customer, ...now you owe me a little extra!

How about water? I would never expect a tip for water. Besides, in my world of alcohol sales and servicece, offering water is often my favorite thing to do for a bewildered imbiber. But do keep in mind, if you ask for water, you're more than likely taking my attention away from another paying and tipping customer. Compensation for that is always appreciated.

Pet Peeve: A guy walks into the bar with three of his buddies. They all order a beer each and the first guy says, (in his most bragging voice) "I got these, boys!" But once the beers come, he pays and takes the beers to the table where the quarto has gathered. He tipped a dollar for the one beer that he's drinking, but he didn't tip for his buddies. Do you think he told his "boys" that he was too big of a cheapskate to tip for their beers and that they should help out the bartender? Do you think that the three others remembered to drop a buck into the jar? Hell no, he looks big and he doesn't want to compromise that. So in other words, I just poured four beers at an average of twenty-five cents each. Either tip for all four pints or have a come-to-Jesus with your boys!


Although I am happy to receive any tip that you think that I deserve, its often the case where a customer looks at the leftover change from a dollar and thinks that that is close enough. Well, sometimes yes and sometimes no. If it's north of seventy-five cents, I'll give a free pass. Afterall, you'll probably "get me" next time. But if the beer is $4.97 and you leave three cents on the counter, then I'm going to assume that you are so out of touch with society that you've probably never seen the genitalia of the opposite sex before.

The good news is that most craft beer bars are graced with the nicest bartenders in alcohol service and that they truly care about you, your wallet and your time in their business regardless whether you're a cheapskate or not. They consider their service an art that they are trying to master. So you're nearly guaranteed to have a great time regardless of your tipping habits. But keep in mind that it's an honor and an asset to your wallet that you are privileged to tip for good service and a good time.