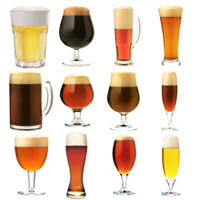 (Yes, there are actual beer judges- it's a pretty cool gig if you don't need money, if you enjoy off-flavors more than good tasting beers, and if you'd rather talk SRM's and IBU's with fellow judges rather than talking with the hottie down the bar about breakfast plans- but hey, chick's dig them! ...not really. Might be a hit at the party though! ...yea not really.)

Any-who, back at the ranch... They get cozy with a couple pints and marvel at the grain bill, hop varieties and water profiles that they *think* are in the beer. After playing this game a couple of times, one gazes across our selection and asks for an English Mild Ale- we don't have them. Then he asks for a Berlinerweiss- we don't have that either. "How about a classic German Marzen". Sorry Sir Judge-A-Lot, that's strike three!

"But you are supposed to be a great beer bar. What kind of craft beer bar wouldn't have these time honored and respectable styles of beer?"

He might have well had put it on a tee. For me, that was easy- "A better beer bar, brother!"

The thing that he didn't realize is that nearly all of our beer selections would be classified in a "specialty" category of some sort. Where I agree with him that those classic styles are quite good when done well, they offer little in the way in intrigue or interest in the minds, hearts or on the palates of today's savvy beer drinker.

I didn't always think this way. I used to consider each and every beer for its style. That was until I started ordering my favorite style by a new brewery- their flagship American IPA and realized that I am tasting the same damn thing that I have tried a thousand times before and now that taste underwhelms me. It has become mundane, banal and boring even if it was done correctly.

It reminds me of when I was a teen and I bought that Duran Duran cassette tape (a character flaw, I suppose). I loved the "Reflex" more than any respectable 12 year old should. I played it a hundred times a day. Then one day, I turned it off and bought a Def Leppard tape (a larger character flaw, for sure!). It wasn't that "Reflex" got worse, but its art, its craft, its excitement was now lost on me as I steered toward more complex sound.

It might not be that those classic beer styles are dead, but if any brewer is resting solely upon them would be like trying to paint a masterpiece... with only primary colors. No, those styles aren't dead but their role in the frantic craft beer scene has changed. Perhaps they are now mere springboards from which imagination, creativity, and excitement can propel.

I now think of style names as merely descriptions of a grouping of tastes that define an origin, a place, a taste. In other words, "English India Pale Ale" is no longer a title for me but a description of a taste. But these groups are not static- they change. And right now they are changing a lot! It is no one's purpose or luxury to define what these styles "should" be, but rather what they "are currently" being. Some naming groups are better at keeping up with the trends than others, so beware of the numbers on those shelf-talkers. Instead, trust your own palate and intuition.

No offense to the makers of classic styles but some of those flavors capture a taste of the origins, technologies and craft of beers that may be four hundred years old. It turns out that a lot has happened in the science, art and technology of beer since then and if brewers aren't embracing its advancements, then they will go the way of the Model-T.

American breweries are now commonly winning awards at prestigious beer competitions worldwide against historical brewers with the beer's that those brewers have mastered for generations. Why? Because American craft brewers aren't bound by the history, traditions or limitations of those. American brewers have used newer tools to get better, faster. And they aren't stopping there....

They are putting annatto and verbena in beers. They are using exotic hop combinations. They are putting beers in bourbon barrels, wine barrels, tequila barrels, cognac barrels, Grand Marnier barrels (who knew that Grand Marnier was aged in barrels!). They ferment with bacteria, use coffee beans that passed through the intestinal system of some weird cat, and use peppers that would make the devil break a sweat. Oysters- check! Rocky Mountain Oysters- eek, but yea- check! Pizza ingredients- yea, check there too! What are they doing? Have our brewers lost their damn minds? By the way, what the crap is annatto?

It turns out that craft beer drinkers are simply a different breed and brewers know it. To them, consistency equals boredom. Predictability is passe. Comfort is so yesterday. Simply put, these drinkers prefer the taste of something that they have never had before over that of something that they know they like. They do so because of the excitement, the education, and for the challenge to their mind, their palate and their spirit.

And they are 100% justified. That's because we all do it with food, of course. If we didn't we would all just go to Applebee's every day- after all, the food is fine. The food is consistent. There's little to gripe about. It's completely serviceable. But we don't eat there everyday because sometimes we want better! Or maybe we just want different even if it won't be as good.

The Alchemist "Heady Topper", Goose Island "Bourbon County Brand Stout", or Founders "KBS" wouldn't win any classic beer competition; however any self-respecting judge would need a moist towelette after a mere sip of these heavenly elixirs. Sorry Mr. Beer Judge, but even through your classic beers may be perfect, my craft beer audience demands more!

But if you are intent on holding onto those classic styles, there is hope! After all Picasso did ok with a simplified color scheme. But those Picassos out there are few and far between. I just hope you don't resort to pulling off your ear to find them.