So, two hundred and fifty craft beer writers walk into a symposium. And I can say with great certainty that they all knew much more about beer than me. There were esteemed authors of world-renowned publishing. There were owners of beer-centric periodicals. There were current beer bloggers. There were brewers who wrote abut their beer endeavors, for better and for worse. There were beer & food experts. There were beer chemists, biologists and physics experts. There were several masterbrewers. There they all were, all 250 of them... and then there was me.
I had absolutely no business being in that room, much less on that stage, behind that podium. But there I was in all my emotional nakedness, asked to introduce the first panel of speakers. I'm still not sure what in my past history indicated that I belonged up there with such esteemed colleagues, but it was without doubt a big mistake. Knees shaking, semi-hung over and sleep deprived, I had the rush of public speaking in front of me and I couldn't be more giddy about it.
But I had never seen such a collection of craft beer talent in one room... well, except for the Beer Cups, the Great Festivals, the Beer Maker's Conferences and the Blogging ones. But this time there was no actual beer! ...and they all showed up anyway, despite all of that. -And that's how I opened my introductions. Breaking the ice that way, I felt a level of comfort that I had no business feeling. At that point, the organizers should be thanking their lucky stars that I ever climbed down from that stage. After all, the last thing that I need was a stage and a captive audience.
But what ensued was utter brilliance. Prior to the Craft Beer Writing Symposium, which was hosted by the University of Kentucky and organized by Dr. Jeff Rice, I had certain assumptions about how the day would go- and all of them were wrong. I expected to hear how formal writing was now dead and that we had to write different for the younger beer drinking audiences that were stepping into beer-drinking age. I expected to hear about the decline of printed literature and I expected to hear smearing comments about smart-phone communication. I expected young speakers to talk about how communication is changing in order to cater to technology. I expected more experience speakers to criticize how that same communication is changing in order to cater to technology. I expected to hear brewers talk about the psychology of reaching their intended customers. -yep, none of that happened at all. This symposium was much smarter than that (See, I told you I didn't belong there). 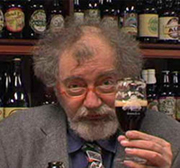 The recurring theme was the notion that "beer is people". There was no talk about srm's, or ibu's, or about malt-bills, or about hop additions, or even the notorious water profiling. Instead, great homage was paid to the late and great Michael Jackson (The Beer Hunter, not the moon walker), and to the folks who paved the way for brewers and writers today, and even to the folks who still blaze those trails today. Speaker Stan Heironymus tells us that in order to conduct great writing, we must conduct great reading; as he directed us to a fantastic and recent writing about Shaun Hill and the Hill Farmstead Brewery, written by Good Beer Hunting. In that article, the details were so succinct, crisp and clear that I could nearly smell Shaun's sweat. By the end of that article I was ready to ask Shaun on our first date. And its that conviction in writing that all the speakers asked young and inspiring beer writers to undertake.
Yet, after hearing about the first few and clumsy years for "All About Beer" magazine (yep, equipped with pin-up girls- how embarrassing?) by Julie Johnson; and then about how the blogging universe has brought together women in the beer professions and injured brewers alike by Teri Fahrendorf, it became clear to me that these talks were going a completely different direction entirely.
Then being stimulated with intelligence and then being delivered a proverbial kick in the ribs simultaneously by New Albanian's Roger Baylor; followed by a show-and-tell of all things what-not-to-do when starting a brewery by Shmaltz's Jeremy Cowan, I began to realize that manifestos and tragic comedy were also part of the beer writing game. 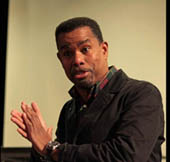 And then the keynote speaker, Garret Oliver commands the room with the brevity that none other can- starting his presentation with a replay of "Shit Beer Geeks Say". As I am guilty as charged of many of the quotes in that skit, the whole whirlwind of a day began to make sense. As his eyes glossed over at the mere mention of fallen friend Michael Jackson, it returned again- beer really is people and there are stories that are just waiting to be written. Beer is not calculations, alcohol content, chemistry or agriculture. Well, it is- however beer is more important than that. If beer is a culmination of art and engineering, then there is an artist and engineer that agonizes over whatever it is that we taste. Our taste buds are simply a recipients of those decisions, that sweat, those tears and all those insurmountable risks and those are the stories that are begging to be told. Coming full circle- we should listen to Stan- in order to give those stories justice, we have got to put the same passion into our writing as those brewers do their brewing. If we do that- we're fine!
Pull my finger... (That was a tension breaker.)
Now, its taken me a long time to get to the poignant part of that day. The elephant in the room was ignored all day long even though it sat there, sucking up all the air. And maybe because we were seduced with the maturity of the panel and the wisdom that they bestowed. Or maybe we don't want to think that today's rapid-fire news dissemination is even relevant- after all, those aren't "traditional" media. But what about Facebook. What about Twitter. And Reddit, and Google Plus, and Pintrest, and Instagram, and, and, and...
It turns out that the majority of younger craft beer drinkers don't own any of the books or magazines that any of those panelists wrote. They don't communicate that way. If its not sentenced fragments or "selfies" then you've lost them. If it can't be shared in a six-second disappearing video, then it's not even relevant. If the thought is that these social media communication techniques aren't true journalism, then you're absolutely correct. The problem is that these watered down techniques are replacing our proper journalism entirely, and its probably for the worse.
RateBeer, BeerAdvocate and various on-like beer "groups" share a ton of useful information yet they are more likely bogged down with your "latest haul", "what I'm drinking now", and "to hell with what's good, but what's rare?" As if a snapshot is supposed to carry the weight of a meaningful description. And its this sense of self-worth, entitlement and assumptionist attitude that's claiming the way that our youngest craft beer drinkers are talking to one another about beer. To hell with anything over 140 characters! It's style over substance, I suppose.
Yet, in that big ole room, with all those experts, and all that wisdom, and intelligence, insight and philosophical though- not one lonely soul even whispered about addressing the insufficiency in the tomorrow of common craft beer writing. Instead, all were only intent on resting on the laurels of what has been written and how it was written- and I suppose, even me. Do I see a Craft Writing sequel for next year? 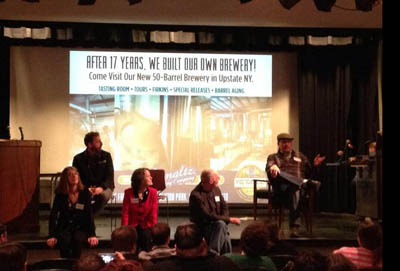 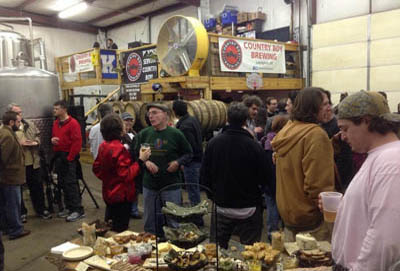 There's no way in hell I'm getting back in that room again. But check out "Shit Beer Geeks Say" anyway: http://vimeo.com/64558227
Follow the conversation with me on Twitter: @BEERchitect #ScrewedUpBeerWeek to keep things rolling.