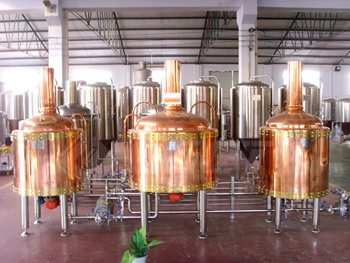 Beer Breams in the Bluegrass!

Beer is booming! But if you are reading this post, then that's no surprise to you. With near fifteen percent growth for each of the last two years many don't know that the craft beer industries are one of the brightest sectors in a flimsy economy. Even in the sleepy Bluegrass Region of Kentucky, the sudsy trends over that span are beginning to take hold. With two new breweries opening in the past year and two more slated for the upcoming months, it is certain that Lexingtonian's thirst for beer is emerging with force.

The collective patience that Central Kentucky portrays has impelled the beer scene. We who live here kid that we are always twenty years behind. What's really happening is that we aren't as swayed by rash trends or as adventurous as a culture as many in more progressive and daring cities. (Hell, we never took sides during the civil war) This notion may explain why craft beer has been slow to evolve here, leaving our beer enthusiasts to revert to long travels, on-line trading or sales, or worse- reverting to the industrial domestic products are best marketed on race cars and billboards.

The mid 1990's saw the microbrewery trend catch fire with progression and excitement until these bright beer spots folded for similar reasons. The Oldenburg taproom (Kentucky Brewing Company) and the Lexington City Brewery rose quick and fell even quicker, mainly due to the large financial undertaking that the beers, facilities, and their infant fan base could not then support.

As the memories of those companies faded, many drinkers resumed their bourbon, wine, and cocktail trends. (It seems that the memory of those beers now is certainly greater than the support they got when they were open. The longer those breweries remain closed, the better their beers get!) What we didn't know is that eight out of every ten microbreweries were failing everywhere across the country- not because the beer drinking populous was digressing, but because they were getting smarter. No longer were we supporting poorly constructed microbrews and their money-grubbing cheap ale producers. We started to understand the differences between a watery hefeweizen and a high quality Franziskaner. We turned from grassy IPAs in favor of Goose Island IPA- and the examples continue to span the 100 or so styles of beer that were available elsewhere.

As the Kentucky Brewing Company and Lexington City Brewery closed, it provided a void of local options. But that same void made Lexington attractive to the quality breweries who remained- Goose Island Brewery, Sierra Nevada Brewing Company, Stone Brewing Company, Dogfish Head Brewery; and later Three Floyds Brewing Company and Founders Brewing Company. With free reign on a community of a highly educated, half million population of largely young professionals with a thirst for beer, these breweries enjoy great success. The bourbon-insired "loose" alcohol laws, no alcohol cap, and easy access along I-64/I75 all make it easy for breweries to get their libations to Bluegrass connoisseurs.

Although the defunct local breweries bit off more than they could chew, a few bright spots for beer remained. Quality beer bars like Marikka's Bierstube and Pazzo's Pizza Pub became the conduit for getting the flavors to customers with dedication to the craft beer market and a pleasant atmosphere. In that ten-year span, a few existing pubs began adding quality bottles and taps to their portfolio while the Chase Taproom and a few chains like BHG's The Pub and Old Chicago sprout up periodically. Still, the region had not dedicated itself to the building beer culture that was on full display in similar sized towns like Eugene OR, Boulder CO, or Asheville NC.

Residing under the radar was Alltech's Lexington Brewing Company, also known as the "Kentucky Ale" brewery which was the remnants of the nostalgic Limestone Brewery that closed a few years prior. Famed for their Hemp Ale and Limestone Ale, Limestone Brewery prided themselves in local limestone-rich water, indigenous ingredients, and surly personalities however their quality and consistency never measured up. Thus, much of their beer was enjoyed as novelty and never really taken serious.

But then bought in 1999 to facilitate the equine nutrition resources, the residual effect of the Alltech purchase was the brewing equipment that soon yielded a microbrewery that operated according to older and more traditional brewing models. To pay homage to the frequently defiant Lexington Brewing Company which operated prior to, after, and actually during prohibition, Alltech's brewing operation took on the namesake for their brewery going forward. Kentucky Ale first, then Kentucky Light (Kolsch-style ale), and Kentucky Bourbon Barrel Ale soon became flagships that Lexingtonians can call their own. With a sparse one-off release for the Pro-Am division of the Great American Beer Festival or a whimsical notion at trial-and-error, the brewery only timidly accepted the craft beer culture that was developing a local flare and the brewery remains somewhat remote and disconnected from their fans.

However all those conservative notions have changed in the past few years. Starting with the opening of The Beer Trappe by the family who owns Pazzo's, the apprehensive attitudes about the new craft beer scene exploded and beer was not only openly acceptable again; it was thriving! Now known as one of the top 100 beer bars in America by Draft Magazine and one of two Kentucky beer establishments mentioned in Christian DeBenedetti's "The Great American Ale Trail", The Beer Trappe became the catalyst for aspiring craft beer enthusiasts turn entrepreneurs. It's supreme dedication to true craft beer culture is both inspired by that of Belgium and inspiring of like-minded venues like Lexington Beerworks who is doing for the downtown Lexington beer scene what The Beer Trappe does for the affluent Chevy Chase neighborhood.

But we can't overlook the inspiration of what was happening in a half-hour's drive south of Lexington. The opening of two smaller nano-breweries in Danville was simultaneously elevating the awareness of hand crafted beer for the quaint but liberal college town. Beer aficionados flocked to The Beer Engine and Lore Brewing Company who quickly rose from the recently repealed prohibitive alcohol laws. Along with V the Market and Bluegrass Pub, these daring artisans and appreciators started to introduce the craft of proper beers to an audience who rarely looked up from King of Beers or wines with a Kangaroo on the label.

But with growth, come growing pains. As the frenzy of craft beer escalated across the country, many of the breweries that enjoyed tremendous success in the region begin retracting their products- not because the interest floundered, but because the demand for their products closer to home demanded that brewer attentions are needed more near home. This created holes in retail and bar shelves from the exodus from Flying Dog, Great Divide, and others became then a gleaming opportunity of a new breed of beer business owners. Now the time is right- high interest and low competition fuels the ripe opportunity for microbreweries to flourish in Lexington once again.

Enter Country Boy Brewing Company and West Sixth Brewing Company. Both opening within the past seven months, they have shifted the ideas of craft beer from something that others had, but now have a few locally operated ones of their own. Both of these breweries embrace the community in charming and unique ways. A visit to Country Boy's taproom seems more like going over to your ole buddy's garage to brew with him and take on a few of their highly experimental beers. They certainly celebrate the rural attitude of the farmhands around the Bluegrass while situated steps from the University of Kentucky campus. The West Sixth brewery is the artistic and streamlined brewery that occupies part of a funky and hip culture of beer and straddles your comfort zones with art and flavor. Both are best enjoyed when at their respective taproom, however West Sixth distributes cans of its flagship IPA. Both keep the beer drinker's attention with special releases and events that keep us all coming back.

Although Lexington's beer culture has extended from what's local to passersby and becoming a craft beer destination in its own right, I can only give brewers and beer-tenders a portion of the credit. I contend that the recent interest in beer stems from the bigger picture of the overall interest in all-things-culinary. Even in our struggling economy, we demand better fresher food. We expect quality on the plate and we expect it at fair price and with low pretension. Even teenagers understand the taste of sushi; they know good feta from bad, and they understand that good chicken sandwiches should be whole meat. They are a new breed that knows not of wonder bread or cheese from an aerosol can. They grew up knowing that coffee is better at the coffeehouse and not from granular instant versions. ...and more importantly, as they turn of legal drinking they don't know a world where craft beer isn't only available, but is a better option. Their palates are much more equipped to developing interest in true beer flavor than our fathers and this upward trend has spawned a new type of dining experience- the gastropub.

Lexington opened its first of its kind, The Village Idiot, less than a month ago and revels in its recommended pairings of gourmet burgers with American brown ales, duck sliders with American pale ales, savory date and bacon appetizers with dopplebock, and bread pudding with bourbon barreled ales. It's no longer acceptable for a Sommeliers to tell you which wine to drink with marsala, but it's now Cicerones explain the links and contrasts of the flavors of the dish to the flavors of the meal to create a culinary event that uses beer as a media to heighten the sensation of taste rather than mindlessly ingesting alcohol beside the plate. It's a new way to enjoy beer in all its glory and Lexington has embraced it beyond measure.

And now slated to open within the next few months is the Glen Creek Brewery in nearby Woodford County with their taproom with restaurant, also in the traditional Chevy Chase neighborhood; and the Blue Stallion Brewing Company which will focus on properly sculpted beers of German and the British Isles. And with chatter about more plans in the works, there seems to be no end in the enthusiasm and thirst among beer drinkers in and around Lexington. As someone who strives to keeps a finger on the pulse of our local beer scene, I am asked daily if Lexington is nearing critical mass when it comes to our craft beer market. I excitedly explain that I don't know where critical mass is, regarding the issue, but I can't wait to see what it looks like!