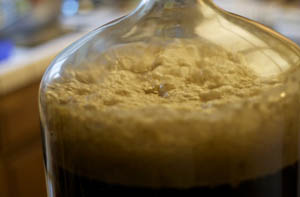 Ok, a guy walks into a bar... (all great stories really do start that way, don't they?)... he storms up to the counter and says that he thinks he's an alcoholic and that it's all my fault! My first inclination was to ask if he goes to meetings. If so, they yes he would be an alcoholic. If not, then he's just a drunk.

But after an "Easy there, Trigger" and probing a little deeper, he raves glowingly about all these higher alcohol beers and how surprised he is in his new-found passion for them. "Imperial"-type beers are his favorite and he's afraid that his love for those intense flavors are masking his growing dependence for the loopy stuff underneath.

Without really addressing any his serious issues at all, I instead congratulated him on his "big-boy" palate that is all grown up and that he should be proud to embrace his craving of ales that excel in alcohol content. But the reason why he likes these types of beers so much is to understand what makes alcohol and what are the residual effects of that process. So strap on your drinking shoes 'cause here we go...

In order to make more alcohol, more barley malt has to go into the kettle. This is because yeast eats the barley sugars and poops out alcohol. But at higher alcohol ranges, the yeast don't do their job at eating those sugars as efficiently at higher alcohol ranges as they do lower alcohol ranges. (It turns out that yeast and myself seem to have a lot in common- I'm sloppy at my work when I'm in a highly alcoholic state too!) So, along with making more booze the yeast also leaves a lot of sugar behind for us to enjoy.

And since there's more sweetness in the form of caramel, toffee, honey or chocolate in the beer, those sugars now have to be balanced out somehow and the preferred method for balancing beer is with hops. So to offset all that sweetness more hoppy goodness of citrus, herbal, tropical, woody or floral flavors are introduced along with its much-needed bitterness. So what we're talking about is simply more flavor and in the right proportions.

Also keep in mind that when the yeast encounter those high alcohols, they (again, like me) becomes quite erratic. So instead of the cleaner ethanol character of lower alcohol beers, the yeast begins to produce noticeable fruit esters and spicy phenolic flavors that add even more unique flavors to the beer. The alcohol that the yeast then produce have different character as well; they're spicier, rosier, solventy and quite warm-feeling. The alcohol itself has become part of the beer's story right along side of the malt, hops, water and yeast.

Its also common for these ales to employ special ingredients like coffee, herbs and spices as well as special technique like barrel aging... its easy to see why the list of things that can be tasted in beer just keep growing! Throw in a cast of "wild" yeast and other micro-flora (fancy word for bacteria- eek!) or a savory aged character and the combinations are endless.

So I then explained to Trigger that we're now talking about greater complexity, sophistication and appreciation for the finer flavors that these ales are so graciously anxious to share. So, much like you will happily pay more for finer cuisine because you appreciate the flavors and find true value in better food, I set Trigger straight- "You simply like better shit, brother!"